It is said “the young may die, but the old must.” Whether I’m right or not it appears to me that a vast proportion of people in this colony die comparatively young, and let any person take a walk through any of the cemeteries in the colony, and note the inscriptions on tomb stones, and he will then perceive that those who had attained the allotted three score and ten years are insignificant in comparison with those who have died from 20 to 50 years of age.

Comparing knowledge from a Blackwood point of view four persons within the past three weeks have joined the great majority from whom there is no response. Mrs. Irving, of the Green Hills, was one of the earliest of Blackwood pioneers, and died honoured and respected last week, aged 72 years. William Hunter, though not residing on Blackwood lately, was so closely connected with friends here that he almost appeared as if he were a native of Blackwood, as he came here while but a boy. After an unostentatious yet eventful career he died in Melbourne at the age of 42 years, and was buried at, the Melbourne Cemetery, when nearly all the old Blackwood residents in Melbourne saw his remains interred in their last resting place. Last week Thomas Sweet, who had been suffering from consumption nearly three years, passed away on Friday morning and was buried at the Blackwood Cemetery on Sunday, when upwards of 150 persons attended his funeral. Mr. Sweet was not a native of Blackwood, but was amongst the first persons as a boy who set foot on Blackwood, 36 years ago. He was 47 years of age when he died.  (See Blackwood Cemetery – History and Pioneers – Matthew Sweet and family)

Still another victim, who, though not born on Blackwood, could almost be claimed as a native, as I believe he was born at his father’s residence near Greendale. I refer to Dr. Shuter, son of the well-known and respected Police Magistrate, Mr. C. Shuter, who died at his father’s residence Malvern, on Easter Monday. I have heard that the young Dr. was a man of great promise, and his death is deeply lamented by a wide circle of friends. The young man, I think, had only attained the age of about 30 years when he died. The news of the finding of 40 ounce nugget on land adjacent Goodman’s Creek, near Bacchus Marsh, was quite a surprise to the benighted miners here. Blackwood pub’s are in luck recently, as Mr. Mackay, of the Commercial Hotel, Barry’s Reef, fell heir to a £1 order on opening one of Wolfe’s Schnapps medicine bottles one day last week. Everything in the shape of mining is extremely quiet at the present time.

What may be termed an almost calamitous sequence of deaths in one family took place at Blue Mountain last week. It appears that both Mr. and Mrs. Dolphin, aged respectively 70 and 72 years, caught the prevailing influenza epidemic in a severe form two or three weeks ago, and Mr. Dolphin died on Thursday, the 15th inst. Whilst he was lying dead in the house his daughter Sarah, who had become bedridden from an incurable disease during the last twelve months, in trying to turn in bed without assistance, broke one of her legs; the doctor, on being called, giving his opinion that it would be impossible to set it. On Saturday last the funeral of Mr. Dolphin took place. He was buried in the Trentham cemetery. On the same afternoon Mrs. Dolphin died, and next day the daughter, Sarah, also died.  Influenza, as in the other cases, being the ultimate cause of death. There is one unmarried daughter left, who, it may well be understood, is severely affected under the sad circumstances. There are two married daughters, one being the wife of Mr. M. Trewhella, and the other the widow of the late Mr. Thomas Sweet. The Dolphin family were amongst the pioneer residents of Blackwood. I can well remember the daughters taking part in concerts in the old Golden Point School when such songs as “Home sweet home” and the like struck a more sympathetic chord in the hearts of their hearers than I fancy the same songs do nowadays. The father followed mining pursuits for a few years, but on the Duffy Land Act of 1865 coming into force he was one of the first to select land at Blue Mountain, the farming venture turned out well, as Blackwood, or rather Barry’s Beef, was a splendid market for many years about that period; and it will be well remembered by old residents the active part the daughter who has just died took in the distribution of the multifarious products of her father’s farm, which was mostly done by means of a pack horse; for wheeled vehicles were not much in use in those times, and whether it was bread, meat, groceries, or even such risky loading as lemonade or soda water, the pack horse and hampers were almost universally used. When business began to slacken Mr. Dolphin sold his farm and appliances to Mr. B. Trewhella, and with his wife and two of his daughters returned to England. I understand he tried farming there, but it apparently did not prosper satisfactorily, and so, after a few years trial he came back to Blue Mountain, and recommenced farming a block of land about two miles to the west of his first selection, where he has remained until the present sad succession of events occurred. Mr. and Mrs. Dolphin would have been married 50 years by next Christmas, and intentions of having a golden wedding party had already been talked of, but circumstances have turned out otherwise. In conclusion it can be mentioned that Miss Sarah Dolphin filled the position of Postmistress at Barry’s Reef for several years, until failing health compelled her to give up the situation. The Rev. E. C. Knox, formerly of Blackwood, but now stationed at Trentham, read the burial services. Since the above was written I have been informed that Mr. and Mrs. Dolphin arrived in Victoria in 1852, and visited England three times since. They were both born at Pershore, Worcestershire, England. The Staffordshire line of reef, to the west of the Simmons Reef reservoir, continues to attract attention; and another lease has been pegged out on the southern extension this week. Messrs. Hill Bros., the original discoverers, are breaking out stone for another crushing; the party to the north are also saving the stone from their shaft for a trial. One of the Egerton tribute parties washed up last week from it crushing of 55 tons, which yielded at the rate of 3 dwts. per ton.

From the Trentham cemetery records – buried there are – http://www.ozgenonline.com/~Carols_Headstones/Trentham.htm 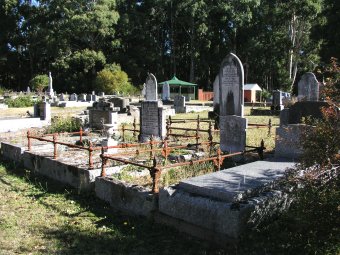